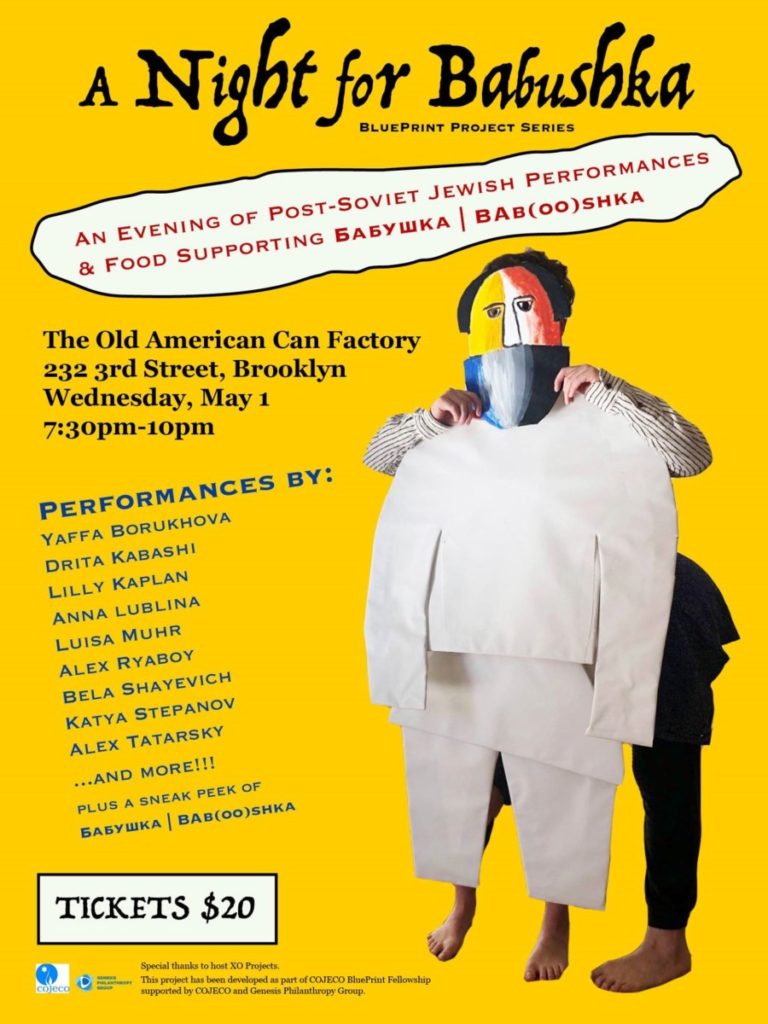 “A Night for Babushka,” is an evening of performance centered around the Post-Soviet Jewish experience. The evening will include a sneak peak of Anna Lublina’s piece Бабушка | BAb(oo)shka which will premiere at the 14th St Y in September 2019 and performances by other Post-Soviet and/or Jewish artists! There will be Russian snacks and joyful conversation! All proceeds from the evening will support the production of Бабушка | BAb(oo)shka.

а | BAb(oo)shka is an interdisciplinary performance that begins with my grandmother telling a true story—chosen by her—in Russian onstage. Her humorous anecdotes about Jewish oppression are then contemporaneously translated into gibberish, into klezmer music, and into a puppet melodrama. These retellings weave together to create a meta-conversation on the act of translation and historicization, exposing the realities of Jewish life in the Soviet Union and how those experiences transform across generations and migrations.

Special thanks to host XO Projects.

This project, developed as part of COJECO BluePrint Fellowship supported by COJECO and Genesis Philanthropy Group, has also engaged the Russian-speaking Jewish community through intergenerational puppetry workshops. Бабушка | BAb(oo)shka has received a work-in-progress performance at the Old American Can Factory in fall 2018 and will be presented, in part, at Labapalooza at St. Ann’s Warehouse in May 2019 and as a part of the Undiscovered Countries Blast Off! Performance on June 2019. The piece will premiere at the 14th St. Y September 26- October 6, 2019